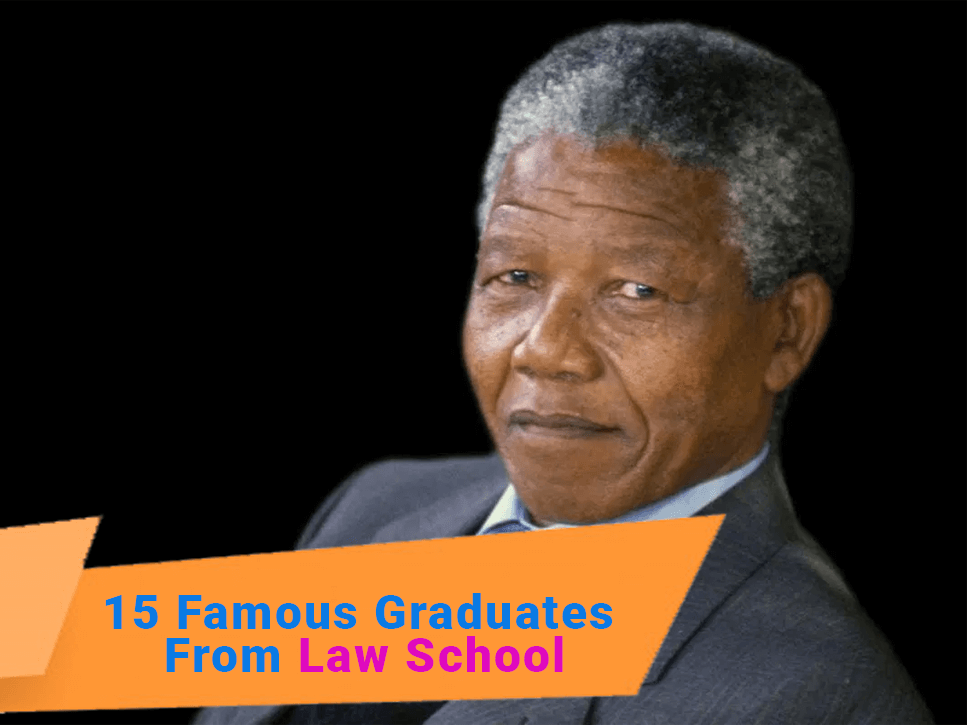 Law is amongst the most important social sciences there is. Not only in terms of keeping a society established and in order, but the field has become important due to its rising need in a transforming politically correct world. We now have several forms of law and several types of lawyers to handle our issues.

To shed some light on the field of law, we have compiled a list of the most famous law school graduates to make you realise that not all law graduates spend their time on their desks, with their heads in law books the whole day.

Presenting to You - 15 Famous Law School Graduates that You Probably Did Not Know of!

We will not keep you waiting, which is why we have arrived at the point where we disclose the 15 famous law graduates to you. Hopefully this will give you some inspiration for your own academic and professional future.

Nelson Mandela is renowned worldwide for tackling racism and dismantling the apartheid system in South Africa. For his activism and consistent efforts against institutionalised racism, he served a total of 27 years in prison during his lifetime and has received tons of honours and recognitions, including the Nobel Peace Prize.

He enrolled in a Bachelor of Arts from University of Fort Hare, studying Anthropology, Politics, Native Administration and Roman Dutch Law; however, he did not complete it. Later on, he completed his Bachelor’s from University of South Africa. He was the only black African student at the University of the Witwatersrand from where he studied Law later on.

Famous for: dismantling apartheid system and for serving as South Africa’s President from 1994 to 1999

Scottish actor and producer Gerard Butler managed to get into University of Glasgow owing to his position as a head boy in high school. His father’s death during his law degree had a detrimental effect on his well-being, causing him to move to California and becoming an alcoholic.

However, he later completed his degree. His drinking caused him to be fired as a lawyer, which ultimately drove him to the acting world. Currently he is sober and well-known for his acting roles.

Famous for: his roles in 300, The Phantom of the Opera, Reign of Fire and Lara Croft: Tomb Raider

Mahatma Gandhi or ‘Bapu’ as he is known in Gujrati, played a key role in standing up to the British Rule in the subcontinent before the Partition in 1947. His campaign against the British inspired many civil rights movements in the world.

He studied law and jurisprudence at University College London and trained in law at the Inner Temple but later went to the bar in.

Famous for: being the ‘Father of the Nation’ in India

We know Jerry Springer for being a news presenter, actor, musician and producer but in fact, he is a former lawyer as well who served as a political campaign adviser to Robert F. Kennedy and worked in a few law firms as well. He has a Bachelor of Arts in Political Science from Tulane University and a Doctor of Jurisprudence from Northwestern University.

Famous for: hosting ‘The Jerry Springer Show’ and ‘Judge Jerry’

Fidel Alejandro Castro Ruz or Fidel Castro was the ultimate Cuban revolutionary who turned Cuba into one-party communist state and implemented state socialist reforms throughout the country. While he was born in a wealthy family, he became interested in leftist politics when he was studying law at the University of Cabana.

Famous for: being the President of Cuba and for being a communist revolutionary

Kids know him as the Nearly Headless Nick from the Harry Potter series while adults may know him for his roles in A Fish Called Wanda (1989), Fierce Creatures (1997) and the sitcom Fawlty. He managed to win a place at Downing College, Cambridge where joined the Cambridge Footlights as well. John Cleese served as a Rector at the University of St. Andrews from 1970 to 1973 and possesses honorary doctorates from four other universities as well.

After his football career, Steve Young enrolled in J. Reuben Clark Law School of Brigham Young University (BYU) and received in Juris Doctor (JD) degree in 1994. Additionally, he has been involved in a few acting rolls and in philanthropy as well.

Famous for: playing in the NFL for 15 seasons

The Republican actor, comedian and commentator is a lawyer as well who has worked as a speechwriter for Richard Nixon and Gerald Ford. He majored in Economics at Columbia College and later went to Yale School of Law. He graduated with honours from Columbia University and as a valedictorian from Yale University. Born: 25th November 1944 (age 75)

Famous for: his deadpan comedy on-screen and for his controversial views in politics

Spanish singer and father of Enrique Iglesias, Julio Iglesias is the most successful European singer in the world and his records have sold worldwide in 14 languages. He has many awards to his name, including the Latin Grammy, World Music Award, Billboard Music, Lo Neustro Award and the Grammy of course. He was inducted into the Hall of Fame of Latin Composers in 2013 and received a star on the Hollywood Walk of Fame in 1985.

Before joining the music industry, he played football while he was studying law at the CEY San Pablo University. A critical automobile accident led to the destruction of his football career and subsequent entry into the music world. He completed his law degree from the Complutense University of Madrid.

Famous for: being one of the finest and most successful Latin singers in the world

Geraldo Rivera is currently known for having hosted several talk shows such as Geraldo and The Mystery of AI Capone’s Vaults. He is a regular at The Five that appears on Fox News and is a well-known Republican journalist.

As far as his academics are concerned, Rivera graduated with a Bachelor of Science in Business Administration from the University of Arizona and played on its lacrosse team as well. After this, he enrolled in Brooklyn Law School and worked internships until he received his Doctor of Jurisprudence (JD) degree from the same university. Based on the guy’s knowledge and exposure, he may be able to help anyone with some law dissertation topics.

Famous for: hosting Geraldo, The Mystery of AI Capone’s Vaults, Geraldo at Large and for appearing on Fox News

Former child actor and current lawyer Josh Saviano achieved fame in the ‘90s for his role as Paul Pfeiffer on The Wonder Years. The child star did not let his acting career get in the way of his education as he eventually stopped acting to pursue his dream of becoming a lawyer.

As such, he studied Political Science from Yale University, worked as a paralegal and finally enrolled in Benjamin N. Cardozo School of Law at Yeshiva University to study for a Doctor of Jurisprudence (JD) degree. Later on, he was admitted to New York’s bar and has since then founded two law firms as well.

Famous for: portraying Paul Pfeiffer on The Wonder Years

Charlie Korsmo became famous as a child star when he starred as ‘Kid’ in the 1990 movie Dick Tracy, which was a well-known action crime movie based on the 1930s comic. Korsmo had a few acting roles to his credit but the former child star has done well in his academics.

He completed his Bachelor of Science in Physics from the Massachusetts Institute of Technology in the year 2000 and went on to work for the Environmental Protection Agency as well as the Republican Party in the House of Representatives. Later on, he completed his Doctor of Jurisprudence degree from Yale Law School in the year 2006.

Writer of legal thrillers, John Grisham’s books have been translated into 42 languages and adapted into 11 feature films and four TV series too. While it is self-explanatory that Grisham has studied from law school, the writer is a practicing attorney, politician and activist as well.

His passion for baseball and football have inspired to write novels based on such themes too. He earned a Bachelor of Science in Accounting from Mississippi State University in 1977 and later enrolled in University of Mississippi School of Law for a Doctor of Jurisprudence degree. While initially he was interested in becoming a tax lawyer, he became interested in general civil litigation later on.

Former figure skater and skating analyst Richard Totten ‘Dick’ Button is the only European Figure Skating Champion without a European background. While initially he considered attending Yale University, he had to manage his skating career and eventually dropped the idea of Yale.

However, he was accepted at Harvard College and remained a fulltime student while managing his skating career. He completed his Bachelor of Laws (LLB) from Harvard Law School in 1956 and was admitted to the bar as well in Washington, DC.

Famous for: being a former champion skater and skating analyst

Oswald George ‘Ozzie’ Nelson was a renowned actor, director, producer and band leader who not only starred in The Adventures of Ozzie and Harriet but also originated it. Besides his success as the band leader of ‘The Ozzie Nelson Band’ and in his sitcom, Ozzie Nelson completed a bachelor’s from Rutgers University and earned a law degree from its Rutgers School of Law as well.

Famous for: starring in The Adventures of Ozzie and Harriet

Order! Order! Time to Focus on Your Law Degree!

Law is one of the most in-demand degrees in social sciences and it is no secret that lawyers sure do make quite well. The study of law helps to teach you about your own rights so you can navigate through life better.

Studying law does not only mean that you become a lawyer. You can become an activist, a journalist, reporter and so much more, similar to the people we have mentioned in this article. In fact, you could even put your knowledge to use by providing law dissertation writing service and helping law students.

In either case, if you were considering pursuing law education or you are in the middle of doing so, keep on studying and hope for the better. Life can take you to places you never knew before!

How To Manage Your Student Loan Balance?
5 October 2020
Go to Top