50 Famous Harvard Students of All Time 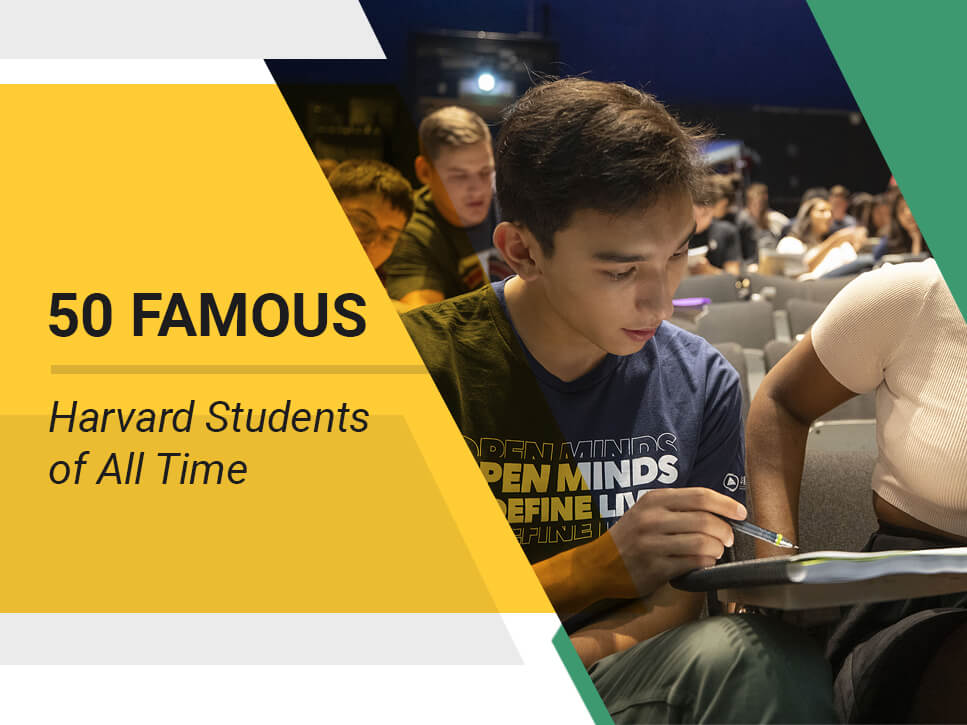 Harvard University, a name that every individual in the world would know. An Ivy League school, the institute holds a reputation for being one of the top universities in the world, producing graduates in Law, Medicine, Sciences and Arts.

In fact, around eight of all the presidents of the United States of America have graduated from Harvard while tech geniuses Mark Zuckerberg and Bill Gates studied at the university at a point in their lives.

In this article, we are going to uncover the names of many famous people, who went to Harvard at some point in their lives or graduated from it.

What do we mean by Harvard Students?

Harvard Students, Harvardians or Vardians are also referred to as Cantabs and share a reputation for having studied from one of the top-notch institutes in the world. Most of us immediately think of Harvard Law School and our mind goes towards personalities like Obama.

However, as hard as it is to get into Harvard, the institute offers different kinds of degrees and programs, which you can find in:

Did you see the extensive range of options available at Harvard? All of them come with their own scholarships and financial aid options as well, thereby providing you many chances to be a Harvard student.

The institute is not only reserved for the geeks who spend their all day fumbled into their textbooks with no regard for other activities in life. In fact, it is necessary that a Harvardian exhibits skills in extracurricular in addition to their academics!

Presenting to You - Some of the Most Famous Harvard Students!

Coming to the point, let us tell you about some of the most famous people in the world, who just happen to be Harvardians. Again, it is not necessary that they completed an undergraduate or graduate program from the institute, rather, each of them have studied from the institute at some point or the other.

As always, Barack Obama is the most famous person we think of every time we hear name Harvard!

Studied from Harvard: Doctor of Jurisprudence (JD) in 1991

Famous for: being the first African-American present of the United States

The preceding president before Barack Obama, George W. Bush is one of the most popular presidents in the American history, owing to his creation of the United States Department of Homeland Security, and for launching the ‘War on Terror’ in Afghanistan in 2001.

Famous for: being the 43rd president of the United States

Studied from Harvard: Computer Science (dropped out in 1975)

Mark Zuckerberg launched Facebook from his dormitory room, which has become a popular social media networking site all over the world.

Studied from Harvard: Computer Science and Psychology (dropped out)

Ruth Bader Ginsburg was the first Jewish woman and the second woman overall to serve as an associate justice of the Supreme Court of the United States and was an advocate for gender equality and women’s rights throughout her life.

Famous for: Second woman to serve on court

Benjamin Netanyahu is the current Prime Minister of Israel since 2009 and who served from 1996 to 1999. He enrolled in a graduate course in Harvard University but did not complete his PhD overall.

Famous for: being the Prime Minister of Israel

Al Gore was the 45th Vice President of the United States from 1993 to 2001 and he was Bill Clinton’s running mate in the campaign of 1992. The pair saw re-election in 1996 as well. Al Gore is a popular environmentalist and environmentalist author as well.

Studied from Harvard: Bachelor of Arts

Famous for: 45th Vice President of the United States

John F. Kennedy or JFK was famous for being the 35th President of the United States from January 1961 till he was assassinated in November 1963. The president was famous for his looks and for being amongst the youngest presidents to be elected.

Studied from Harvard: Bachelor of Arts

Famous for: being the 35th president of the United States

Studied from Harvard: Bachelor of Arts in History (1959)

Famous for: being the 49th Imam of Nizari Ismailism

Prince Ali Raza Pahlavi was the younger son Mohammed Reza Pahlavi or the former Shah of Iran as we know him. Prince Ali was to be second in line for the throne until the Iranian Revolution. He was studying for a doctorate in Ancient Iranian Studies and Philology before he died from a self-inflicted gunshot wound in 2011.

Neil deGrasse Tyson is not just popular for being an astrophysicist and a cosmologist but he is an active planetary scientist, science communicator and author. He majored in Physics from Harvard and received his AB degree in 1980. He went on to receive a doctorate in his field and contributed to the planetary science and astrophysics field a lot.

Famous for: his work in the field of astrophysics, cosmology and planetary science

Nathan Blecharczyk is currently serving as the chief strategy officer of Airbnb, making him the 474th richest person on earth. He co-founded the company along with Brian Chesky and Joe Gebbia, initially serving as the Chief Technology Officer.

Studied from Harvard: Bachelor of Science in Computer Science

James E. Burke served as the Chief Executive Officer of Johnson & Johnson from 1976 to 1989 and worked around 40 years at the company. He did his MBA from Harvard Business School in 1949.

Famous for: being CEO of Johnson & Johnson

Philip Caldwell ran the Ford Motor Company from 1978 to 1985 and managed to orchestrate perhaps one of the most successful turnarounds in the history of business especially of Ford Motor Company. He was also the first member outside the Ford family to run the company/

John Thomas Cahill was a lawyer and prosecutor who served as the United States Attorney from 1939 to 1941 for the Southern District of New York. He did his LLB from Harvard Law School in 1927.

Famous for: serving as the United States Attorney for New York’s Southern District

Vittorio Colao was the former chief executive officer of Vodafone Group from July 2008 to October 2018 and he did his MBA from Harvard Business School.

Famous for: being the former CEO of Vodafone

Robert Louis Dreyfus was a French businessman who was best known as the chief executive officer of Adidas-Salomon and Saatchi & Saatchi. He was also the largest shareholder of Olympique de Marseille, which gained notoriety for its match fixing scandal.

Studied from Harvard: Business in 1973

Famous for: being the CEO of Adidas

Andy Jassy is currently the Chief Executive Officer of Amazon Web Services (AWS), which is the cloud computing business of Amazon. He studied a Bachelor’s degree from Harvard College and then proceeded for an MBA from the Harvard Business School.

Famous for: being the CEO of AWS

Chris Kempczinski is currently the Chief Executive Officer of McDonald’s Corporation since 2019. He has done an MBA from Harvard Business School in 1997.

Famous for: being CEO of McDonald’s

Famous for: being CEO of Procter & Gamble

Tatyana Ali is best known for playing the role of Ashley Banks on The Fresh Prince of Bel-Air that aired from 1990 to 1996. She completed her bachelor’s in African American Studies and Government from Harvard University in 2002.

Studied from Harvard: Bachelor’s in African American Studies and Government in 2002

Famous for: playing Ashley Banks on The Fresh Prince of Bel-Air

Matt Damon is one of the bankable stars of Hollywood and has received various Academy Award and Golden Globe Award nominations as well. He was studying for a Bachelor of Arts degree in English from Harvard University but left before he could complete his degree to star in Geronimo: An American Legend.

Studied from Harvard: Bachelor of Arts in English (left)

Famous for: being an actor, producer and screenwriter

Rashida Jones is an actress, writer and a producer who has done her Bachelor’s from Harvard University in 1997 and Religion and Philosophy.

Studied from Harvard: Religion and Philosophy in 1997

Famous for: her roles on The Office, Parks and Recreations and others

The daughter of Naomi Judd, Ashley Judd is a successful actress whose career has spanned three decades. She is also an activist who is involved in political activism and she holds a Master of Public Administration (MPA) degree from the John F. Kennedy School of Government at Harvard University.

Studied from Harvard: Master of Public Administration in 2010

Famous for: being an actress and activist

Neta-Lee Hershlag or Natalie Portman as we know her is one of the most famous actresses of Hollywood, having starred in Star Wars, V for Vendetta, Black Swan, Thor, Jackie and others. She holds dual Israeli and American citizenship and attended Harvard while filming for Star Wars from 1999 to 2003.

Studied from Harvard: Bachelor’s in Psychology (2003)

Famous for: starring in blockbusters and for playing psychologically troubled women

Ali Amr Farag is an Egyptian professional squash player who graduated from Harvard University in 2014 with a Mechanical Engineering degree.

Studied from Harvard: Mechanical Engineering in 2014

Ryan Fitzpatrick began college football when he was an economics student at Harvard and is currently a quarterback for the Miami Dolphins in National Football League (NFL). He is well known for his long beard as well.

Famous for: being a quarterback for NFL Miami Dolphins

One of the best supermodels in the world, Tyra Banks created and presented America’s Next Top Model from 2003 to 2015. Though not a Harvard graduate, Tyra Banks has completed a nine-week certificate program from Harvard Business School in 2012.

One of the leading actresses of Bollywood, Kareena Kapoor hails from the Kapoor family and has been present in the industry from two decades. Though she did not receive formal education from Harvard, she had enrolled in a three-month summer course in microcomputers.

Famous for: being one of the leading actresses in Bollywood

Ellen Pao is amongst the renowned women in technology who continue to voice their opinions and criticism regarding unfair practices and treatment of women in tech. She was the CEO of Reddit in 2014 and holds a Juris Doctor and an MBA from Harvard University.

Famous for: filing gender discrimination lawsuit against Kleiner Perkins and for being the CEO of Reddit

You Could Be a Harvard Alum, As Well You Know?

Gaining admission into Harvard is difficult but not impossible. You could be from anywhere in the world and still benefit from their financial aid and scholarship programs, provided that you follow some guidelines.

For helping students all over the world, trying to garner admission in their dream universities, we at Dissertation Proposal UK provide personal statement writing service as well. All you have to do is get in touch with us through Live Chat, Phone or Email and our customer support team will be at your disposal right away!