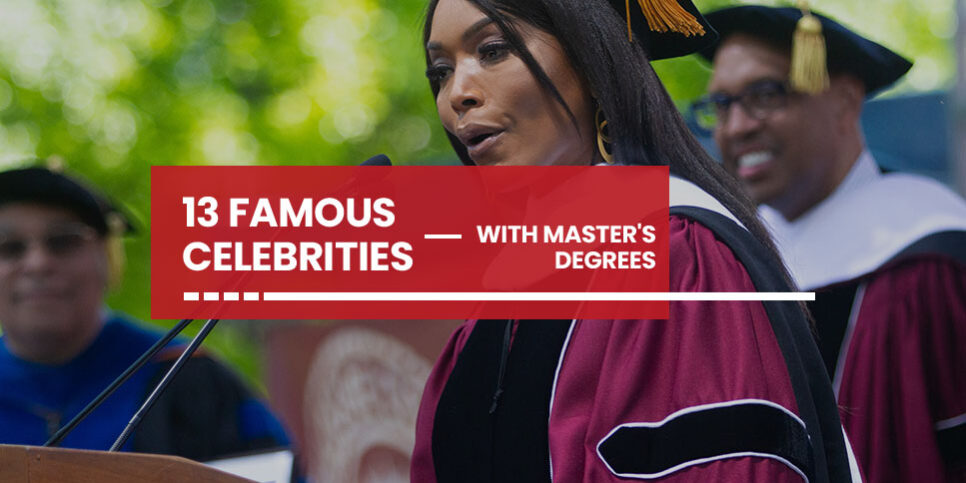 13 Famous Celebrities with Master's Degrees That Might Just Surprise You 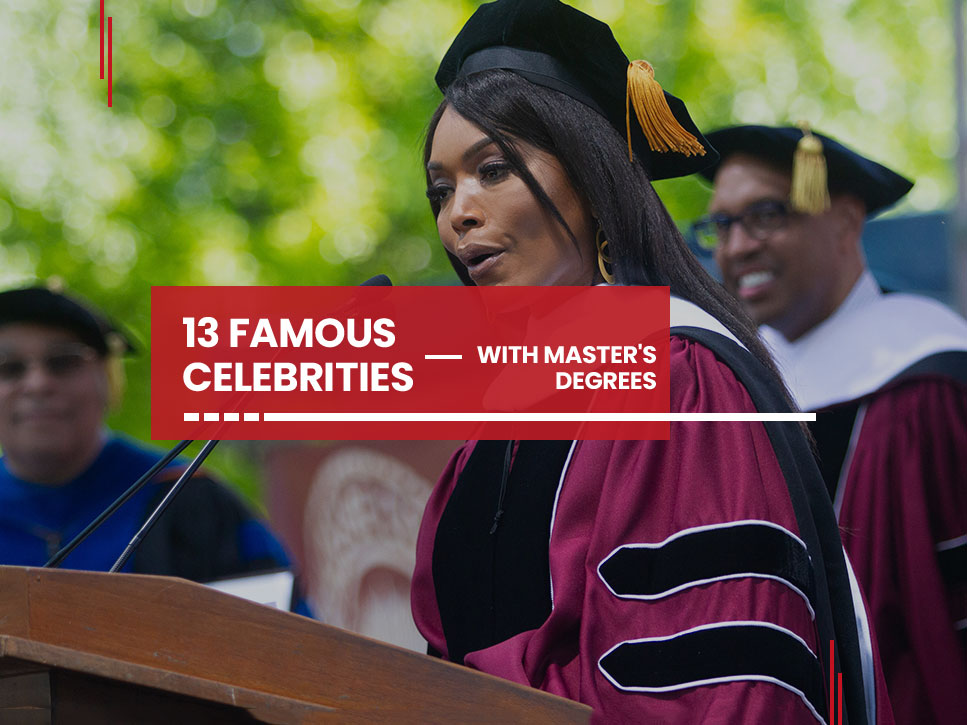 A master’s degree or graduate level degree is something that not many of us consider doing, owing to the level of difficulty. The four years of undergraduate school are enough to exhaust you both mentally, physically and even financially!

However contrary to public opinion; there are plenty of celebrities in the world who possess a graduate level degree even though they have managed to make it big in their fields and even garnered fame.

In this article, we have listed down some of the most celebrities who have completed their graduate level education and act as an inspiration to all of us considering a Master’s degree.

Making the Right Decision to Go for a Master’s

Given the stressful lives of today, one would imagine if they would want to move on with their graduate level education or not, especially if they have started making it big in their field.

While most people tend to opt for a master’s when they want to climb the managerial ladder in their field, some do it out of sheer love for advancement in their knowledge or their love for education.

In any case, here are four things to consider before making the final decision for your master’s degree:

Do not rush into your master’s just because you are not ready to face adult life and make a well-informed decision. Do keep in check if you will study it fulltime or go for a part-time degree to manage it with work.

Since the level is way higher than that of bachelor’s, expect a challenge and most of us, make sure that the effort if worth it all in the end. Most importantly, remember that you should have a helping hand by your side such as Dissertation Proposal UK. You can get master dissertation help or even buy MBA dissertation writing service from us, as you want!

Presenting to You - The 13 Most Famous Celebrities with Master’s Degrees!

Coming to the point, let’s shed light over the famous people who are much more educated than we must have thought and who carry a graduate level degree to their name.

David Duchovny earned a Bachelor of Arts in English Literature from Princeton University in 1982 and then went on to do his Master’s in the same. He began work on a PhD as well but the work is yet unfinished. Duchovny has utilised his degree and become a writer, having published three books to his name in addition to his acting career.

Famous for: playing Fox Mulder on The X-Files

A widely-considered pioneer of action heroines in the science fiction genre, Susan Alexandra ‘Sigourney’ Weaver has received Academy Award and Golden Globe nominations during her acting career extending beyond four decades. She received a Bachelor of Arts in English from Stanford University in 1972 where she witnessed her first involvement in acting. After this, she proceeded onto an MFA from the Yale School of Drama in 1974.

Famous for: playing Ellen Ripley in the Alien franchise

The Swedish filmmaker, actor and martial artist received his breakthrough for his role as Ivan Drago in Rocky IV in 1985 and has since then found success in The Expendables series as well. He studied Chemical Engineering in the 1970s on various scholarships from Washington State University and Clemson University and eventually graduated from the Royal Institute of Technology in Stockholm in the same. He received his master’s from University of Sydney in 1982.

Master’s Degree: Master of Science in Chemical Engineering from University of Sydney

Kenyan-Mexican actress and author Lupita Amondi Nyong’o earned a Bachelor’s in Film and Theatre Studies from Hampshire College before entering the acting industry. She went on to pursue a Master’s in Acting from Yale School of Drama while directing a documentary in 2009.

Master’s Degree: Master of Fine Arts in Acting from Yale School of Drama

Best known for playing Spock in the Star Trek franchise, Leonard Nimoy taught acting in his early twenties before making it big on the screen. He earned an MA in Education from Antioch College as well as honorary doctorates from Antioch University in Ohio and from Boston University owing to his activism in the arts, Holocaust remembrance and the environment.

Master’s Degree: Master of Arts in Education from Antioch College

Famous for: playing the role of Spock in the Star Trek franchise

Popular for playing real-life African-American women in movies, Angela Basset has Academy Award and Golden Globe nominations to her name. The first in her family to go to college, she earned a BA in African-American Studies from Yale University and chose an MFA from Yale School of Drama despite her family’s wishes.

Famous for: several roles involving African-African women such as Tina Turner in What’s Love Got to Do With It (1993)

We all know Rowan Atkinson for his comic roles, especially as Mr. Bean in the series by the same name. His top grades in A levels’ sciences earned him a spot in Newcastle University, from where he graduated with a BSc in Electrical and Electronic Engineering. He subsequently went for the same field and did an MSc in the same from The Queen’s College, Oxford in 1975

Master’s Degree: Master of Science in Electrical Engineering from The Queen’s College, Oxford (1975)

Arthur Ira ‘Art’ Garfunkel is known for his partnership with Paul Simon in the duo Simon & Garfunkel, which is a folk rock duo. His solo career has also been successful and Rolling Stone Magazine has ranked him 86 in its 100 Greatest Singers of All Time list. He majored in Architecture from Columbia University, switching to a BA in History. He followed it with an MA in Mathematics Education from Teachers College, Columbia University in 1967.

Famous for: being part of the folk rock duo namely Simon & Garfunkel

Ashley Judd has starred in several hit films and has been involved in political activism as well. She completed her Bachelor’s from University of Kentucky with French as her major and anthropology, art history, women’s studies and theatre as her minor. She has received Honorary Doctor of Humane Letters from Union College in Barbourville Kentucky and completed an MPA from John F. Kennedy School of Government at Harvard University in 2010 as well. She began a PhD in UC Berkeley but discontinued due to siege migraines.

Famous for: several roles including Rebecca Winstone in the TV series Missing (2012)

A popular figure in the Alternative Rock world, Dexter Holland graduated as a class valedictorian in 1984 and earned a Bachelor of Science in Biology from the University of Southern California. He went on to earn a Master’s in the same and enrolled himself for a PhD until finding success with The Offspring, thereby plunging into the world of punk music.

However, he returned back as a doctoral student in 2013 and completed his PhD in Molecular Biology from Keck School of Medicine in 2017.

Master’s Degree: Master of Science in Molecular Biology from University of Southern California

Famous for: being the lead vocalist, primary songwriter and rhythm guitarist of The Offspring

Peter Frederick Weller is not only famous for his roles in the RoboCop series but is an art historian as well. He graduated with a BA in Theatre from University of North Texas and attended the American Academy of Dramatic Arts as well. During his undergraduate, he played the trumpet in a campus band too.

Later on, he opted for an MA in Roman and Renaissance Art at the Syracuse University where he also taught courses in ancient history. Weller followed his education with a PhD at University of California, Los Angeles (UCLA) in Italian Renaissance Art History in 2013 and completed the doctorate in 2014.

Master’s Degree: Master of Arts in Roman and Renaissance Art from Syracuse University

The lead vocalist and only constant member of Bad Religion, Greg Graffin is not just a musician and singer but an evolutionary biologist as well. The punk rock musician not only holds a Bachelor’s, but a Master’s and even a PhD. He studied up till his graduate level education from University of California, Los Angeles (UCLA) and completed his PhD in Zoology from Cornell University.

Famous for: being the lead vocalist and songwriter of Bad Religion

Are You All Geared Up for Your Postgraduate Degree?

Did you find these celebrities inspiring enough? Do you think you could benefit from having a graduate level degree as well?

Just remember, all that matters in life is how YOU perceive it and how YOU consider managing it all in the long run. Sure, education is costly and takes an emotional, mental and physical toll on you; nevertheless, the knowledge gained makes the whole experience worthwhile.

Looking at these celebrities, it is no secret that they received some kind of mental exposure or the other and leveraged that exposure into strengthening their other skills. Knowledge is the food of the brain so keep on studying.

As far as managing your dissertation is concerned, whenever you get stuck, just remember that you can always buy master dissertation writing service from Dissertation Proposal UK and render yourself stress free!