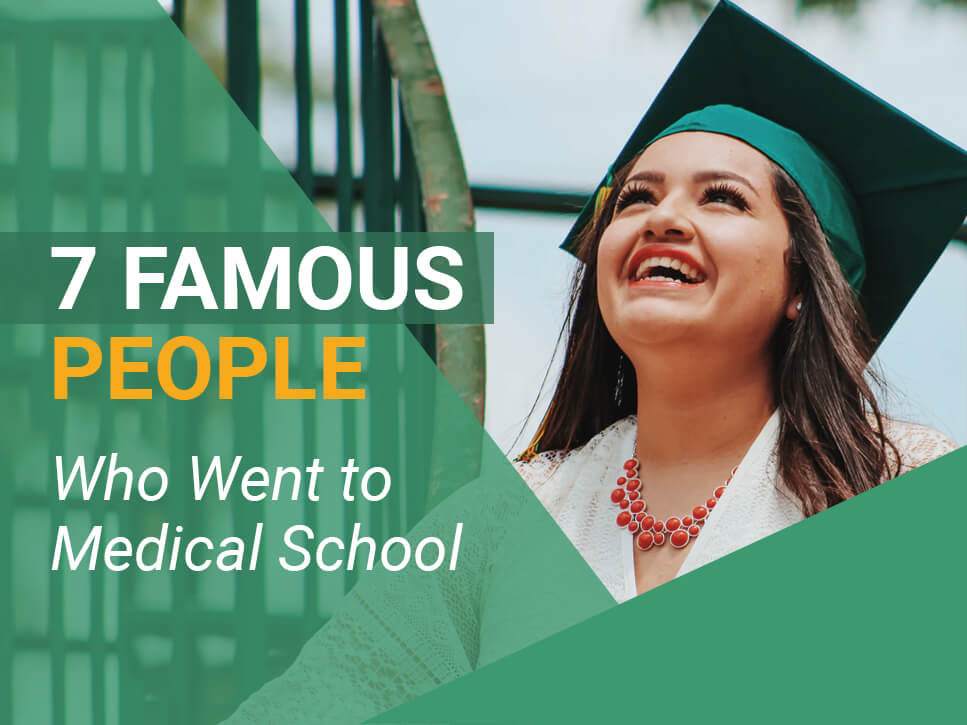 Most of the famous people we follow include on-screen pop stars that have won our hearts in the movies, TV series, music and other types of pop material. However, famous people are not only limited to the pop screen and in fact include anyone who is known by everyone, even if it is the president.

Most of us know Boris Johnson as the prime party and that he is the Leader of the Conservative Party but little do we know that he worked as a journalist before entering the world of politics.

Similarly, there are plenty of famous people who went to medical school but this particular aspect of their lives does not make the list of their popular things.

Med school does not only refer to universities that teach you medicine or how to become a doctor. In fact, the medical world extends far beyond medicine and includes subjects like psychology and biology as well.

As such, med school is not something that only we regular people imagine doing. In fact, a number of famous people were previously on the path to entering the med life before they found fame in another category. Who knows, maybe it was their exposure to the medical life that helped them achieve stardom?

Okay, enough small talk. We know you are eager to find out about those famous people who went to medical school. Let us move ahead!

The legendary Argentine Marxist, Che Guevara’s photograph is available on all kinds of merchandise all over the world. Whom we know as Che Guevara was born as ‘Ernesto Guevara’ and had an inclination towards the left spectrum from always.

Not only was he a guerrilla leader and a major figure in the Cuban Revolution, but Che Guevara was a physician and author as well. However, one problem that Che Guevara suffered from was chronic asthma, which forced his family to move to a drier region as his family’s tea plantation area was proving too humid for the enthusiastic adolescent.

An intellectual from the very beginning, he participated in chess tournaments when he was only as old as 12 and had a keen interest in the works of Latin American writers as well and excelled in sports too. His passion for rugby earned him acclaim from his teachers and peers alike and earned him the nickname ‘Fuser’ as well.

Growing up, Che Guevara witnessed the death of his grandmother and this pushed him to pursue medicine so he could help the sick. To do this, Guevara set aside his initial dream of studying engineering and decided to become a doctor instead. He enrolled at the Faculty of Medicine of Universidad de Buenos Aires.

This journey to medical school opened his eyes to the widespread poverty and injustice in the world after having completed his studies in 1953; he decided to put his knowledge to use for the greater good and became working for bringing a radical change in the world, thus making him the revolutionary hero we know of today.

Popularly known for her eccentric character ‘Phoebe Buffay’ on F.R.I.E.N.D.S, Lisa Kudrow has won the hearts of people worldwide, regardless of geographic regions. The show has managed to achieve popularity amongst the youth especially Millennials, Generation Z and Generation Alpha.

Most of us are accustomed to seeing her in comic roles, such as in Romy and Michele’s High School Reunion (1997), The Comeback (2005), Easy A (2010), Booksmart (2019) and a few others. However, Lisa Kudrow holds a Bachelor of Arts in Biology from Vassar College in New York and worked in the field for eight years too!

Born in Encino, Los Angeles, Lisa Kudrow lived a Jewish upbringing and was the middle child to a physician father and a travel agent mother. Having been exposed to the medical field since her childhood, Kudrow decided to follow in the footsteps of her father and pursue Biology as her area of interest. In fact, Kudrow has also earned research credit on her father’s study on ‘the comparative likelihood of left-handed individuals developing cluster headaches’.

It was her brother’s persuasion to test her comedy skills that she joined an improv troupe named Unexpected Company and thus began her comedy career. While she was set to play the role of Roz Doyle in Frazier, Kudrow was replaced by Peri Gilpin and which had a devastating effect on her. Determined, Kudrow eventually landed the role of Phoebe Buffay and found herself as one of the most popular female and comedy characters of all time!

The 7-foot Spanish basketball player has achieved popularity as an NBA (National Basketball Association) player, most recently for the Milwaukee Bucks. Born and raised in Barcelona, Pau Gasol had a medical doctor for a mother and a nurse administrator for a father. Additionally, both of his parents stood over 6ft. tall and were professional basketball players as well.

This exposure to both basketball led him to start playing for his school team, eventually signing up for Cornella. On the other side, when he was 11, he had gotten to know in school that Magic Johnson had been diagnosed HIV positive and this propelled him to pursue medicine in life, so he could find a cure for AIDS in life. Consequently, he enrolled himself in the University of Barcelona to take his interest in medicine further.

However, his career at the university was short-lived and he eventually left his medical studies to manage his basketball career at FC Barcelona.

Nevertheless, Gasol still possesses a deep interest in medicine and makes sure to visit the Childrens Hospital of Los Angeles. In fact, he was once scheduled to observe a surgery but had to cancel when he suffered from fever the day before. Who knows, maybe he could be providing help with medical dissertation topics as well?

So much is the intellect of the basketball player is that has taught himself Italian and French. In fact, it is often said that he and Kobe Bryant often conversed in Spanish to keep others from knowing their tactics during the games.

You may know Ken Jeong from the Hangover series and his comic roles in Knocked Up (2007), Role Models (2008), Furry Vengeance (2010) and Crazy Rich Asians (2018). Additionally, the comedy actor is famous for his sitcom Dr. Ken, for which he worked as the executive producer, writer and the creator of course.

The life of Ken Jeong is not all comedy roles only, but in fact, he is a licensed physician who only recently stopped practicing once he started earning enough from his acting career. Born to South Korean immigrant parents, Ken Jeong spent his years in Greensboro, North Carolina and started acting during his pre-med coursework at Duke University.

Ken Jeong even thought about majoring in drama at one point in life. Even though he did not opt for the majors back then, he did spend a summer taking theatre classes at the University of California, Los Angeles (UCLA). Even though he was a medical student in North Carolina, he was a regular at open mic nights in the Raleigh-Durham circuit. His knowledge of the medical field is quite helpful in cases of medical emergencies during performances and on-set.

Born as Kamaljit Singh Jhooti in Hounslow, London, England; Jay Sean is best known for songs such as ‘Down’ and ‘Do You Remember’, especially amongst the youth in Southeast Asia. His parents are Punjabi Sikh immigrants from India and he saw much of his childhood in Southhall, West London. Having been interested in music from an early age, Jay Sean was involved in a hip hop duo named ‘Compulsive Disorder’, which he formed with his cousin.

After his O/A levels, he enrolled himself in the Barts and The London School of Medicine and Dentistry at Queen Mary, University of London for studying Medicine. However, he dropped out from the university in 2003 to move forward with singing fulltime. He chose the stage name Jay Sean as Jay was his nickname while Sean, he derived from Shaan, which means ‘shining star’ in Punjabi and it was what his grandmother would call him. In 2009, Jay Sean was ranked at 35 in Billboard’s list of the Hot 100 Artists of 2009. His debut single ‘Down’ earned him the rank of the first solo artists of South Asian origin to top the Billboard Hot 100.

Born and raised in San Diego, California, Mayim Chaya Bialik was born to Jewish immigrants who resided in The Bronx, New York City. She had a Bat Mitzvah and describes herself as a Modern Orthodox Jewish as well as a staunch Zionist. Bialik started her acting career as a child actress in the late 80s with Pumpinkhead as her first onscreen appearance.

Mayim Bialik became to be best known for her role in Blossom, which was a favourite amongst most teenagers in the US in the 90s. Blossom ran from 1991 to 1995 and earned her lots of fame during the era. However, a successful acting career at such a young age did not mean that Bialik was going to let her studies suffer.

Her acting credits earned her a deferred acceptance and she was able to attend University of California, Los Angeles (UCLA). She studied a Bachelor of Science in Neuroscience while her minors included Hebrew and Jewish studies. Her degree marked completion in 2000 and her initial plan was to study medicine.

However, since she did not have grades she needed for going for medical school, she decided to go for a doctorate in neuroscience instead. Though she did take a break from her education to return to acting in 2005, she completed her PhD in Neuroscience in 2007 from the same institute. Her dissertation was based on an investigation of hypothalamic activity in patients suffering from Prader-Willi syndrome.

Do You Feel Geared Up for Studying Medical Now?

So you have gone through the list of famous people who went to med school, which has probably registered a spark of interest in you for medical as well. Guess what, it is brilliant!

If you had remotely considered studying medical and felt not so confident about it, take out advice and just go with the flow. Of course, this takes into consideration your financial constraints, your mental capabilities and if you have other responsibilities or not.

Truth be told, all of these famous people on our list did not go down the medical path and ended up in a different life altogether. However, you cannot deny that perhaps the medical exposure led them to where they are today. Who knows?

In either case, if you think you need help with medical dissertation topics during any of your medical related degree; you can count on Dissertation Writing Help to be your saviour.

Just get in touch with us right away and complete your medical dissertation with no more hassle now!