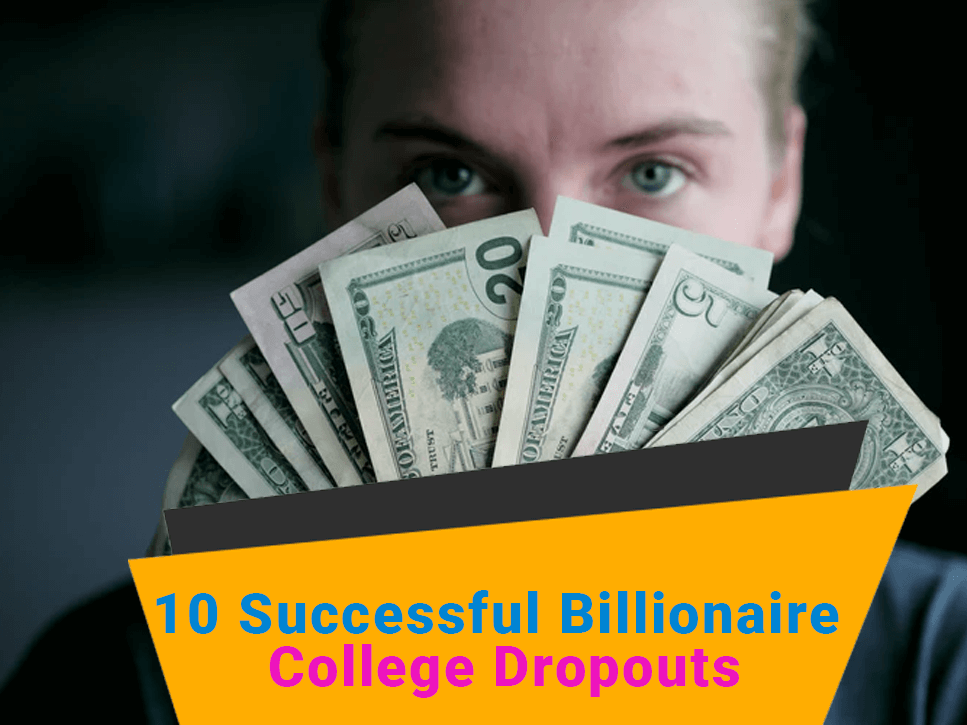 Every now and then, we hear about yet another billionaire who has managed to add to their wealth while we are left watching them on our screens.

Most of us, especially those who are studying for an undergraduate program currently cannot help but dream about becoming the same kind of billionaires in the future.

However, to break your bubble, many of the world’s richest did not even complete their undergraduate education. In fact, they had such a clear vision about what they wanted to do, which is why they decided to pursue their vision, rather than wait for their degree to be over.

If you are wondering, who these people are, wonder no more for we have combined a list of 10 such people for you.

Presenting to You: The 10 College Dropouts Who made it Big as Billionaires!

We do not wish to keep you waiting, check out these 12 college dropouts who went on to become billionaires in their lives.

Perhaps, they could provide an inspiration to you for believing in your dreams too!

Popular for being the founder and chairman of Dell Technologies, Michael Dell is currently the CEO of one of the largest technology companies in the world. In 2020, he was ranked 27th as the richest person in the world by Forbes, having a net worth of $27.2 billion.

Born in Houston to a Jewish family comprising of a stockbroker and an orthodontist, Michael Dell took a high school equivalency exam when he was eight and opted for a pre-med in 1983 at the University of Texas.

He began his informal business during his pre-med education only, making sales for upgrade kits for personal computers. Afterwards, he applied for a vendor license so that he could bid on contracts for the State of Texas. Considering the high business intellect of Michael Dell, he could definitely provide help in writing a business plan to others.

Finally, in 1984, he registered his company as ‘PC’s Limited’, which made sales from $50,000 to $80,000, leading him to relocate to North Austin and renaming the company as ‘Dell Computer Corporation’.

Dropped out of: University of Texas

We all know Steve Jobs for co-founding Apple and for blessing us with the iPhone, Macintosh, iPad and iPod. Not only did he serve as a crucial personality in the revolution of personal computers and smartphones, but Steve Jobs funded the Graphics Group, which later become Pixar Animation Studios as well.

Raised in the San Francisco Bay Area, Steve Jobs attended Reed College before he dropped out and decided to travel India in 1974 for studying Zen Buddhism and seeking enlightenment. Along with Steve Wozniak, he founded Apple in 1976 for selling Wozniak’s personal computer, namely Apple I.

In 2003, Steve Jobs was diagnosed with a pancreatic neuroendocrine tumor, which perhaps led to his respiratory arrest and subsequent death in 2011.

Dropped out of: Reed College

Famous for: co-founding Apple Inc., being the Chairman of Pixar and NeXT

Bill Gates has managed to be included in the world’s wealthiest people list by Forbes many times since 1987. Currently, he is the second richest person in the world with a net worth of US$113.7 billion, just behind Jeff Bezos of Amazon.

He enrolled at Harvard College where he chose pre-law but later went with mathematics and graduate level computer science courses. However, he left Harvard after two years.

Evan Clark Williams is the co-founder of many technology companies, the most notable amongst which is Twitter. He has also founded Medium (an online publishing platform) and Blogger (a blog-publishing service). As of September 2020, his net worth is USD 2.3 billion.

Having been raised on a farm in Clarks, Nebraska, Evan Williams assisted with crop irrigation and studied for one and a half years at the University of Nebraska-Lincoln.

Dropped out of: University of Nebraska-Lincoln

Mark Zuckerberg continues to be amongst the most famous and richest people in the world, owing to his co-founding of Facebook Inc. Facebook is currently one of the largest social media networking sites in the world with 2.7 billion monthly active users.

Born and raised New Yorker, Mark Zuckerberg launched Facebook from his Harvard dormitory in 2004, along with his college roommates that included Eduardo Saverin, Andrew McCollum, Dustin Moskovitz as well as Chris Hughes.

With an estimated net worth of around $99.6 billion, Mark Zuckerberg is the 4th richest person in the world, as per Forbes. With a reputation as a ‘programming prodigy’, Mark Zuckerberg studied Computer Science and Psychology in Harvard but left it afterwards. However, he received an honorary degree in May 2017 from Harvard.

Dropped out of: Harvard University

Lawrence Joseph ‘Larry’ Ellison is the Chief Technology Officer (CTO), Executive Chairman and Co-Founder of Oracle Corporation. With a fortune of around $69.1 billion, Larry Ellison is the sixth richest person in the world. Born in New York City, he was raised by his adoptive parents who raised him as a Reform Jew, even though he became a religious skeptic later on.

He studied at South Shore High School in Chicago and then was enrolled as a premedical student at the University of Illinois at Urbana – Champaign. During his time at the university, he was named the science student of the year but when his adoptive mother died; he withdrew from the university before his final exams.

Later on, he studied mathematics and physics for a term at the University of Chicago too. He began working at Ampex, where he felt influenced by Edgar F. Codd’s research on relational database design and this paved the way for the formation of what later became Oracle.

Dropped out of: University of Chicago

Ukrainian billionaire Jan Koum was amongst the brains behind WhatsApp, one of the most widely used messaging applications in the world. He co-founded WhatsApp in 2009 along with his colleague Brian Acton, whom he at Ernst & Young.

Born in Kyiv, Ukraine (then part of the Soviet Union) to Jewish parents, Jan Koum grew up in Fastiv and later on moved to Mountain View, California in 1992. By 18, he had developed an interest in programming and enrolled himself at the San Jose State University while simultaneously working as a security tester at Ernst & Young.

Jan Koum worked with Brian Action at Yahoo! as well and applied to Facebook as well with him, only to be rejected. After buying an iPhone in January 2009, he considered the idea for the app and finally incorporated WhatsApp Inc. in February 2009 in California.

Co-founder of Scour, Red and the renowned Uber, Travis Kalanick grew up in Northridge, LA, California and studied computer engineering and business economics at the University of California, Los Angeles (UCLA).

It was during his studies only that he laid the foundation for Scour, an online file exchange service. This was his first businesses and he dropped out of UCLA to work fulltime for Scour. Due to MPAA and RIAA’s lawsuit against Scour, he had to file for bankruptcy in September 2000.

However, he started Red Swoosh in 2001 with Michael Todd, which was acquired by Akamai Technologies in 2007. In 2009, he teamed up with Garret Camp for co-founding ber and succeeded Ryan Graves as its CEO in October 2010.

Dropped out of: University of California, Los Angeles

The richest person in Asia, Mukesh Dhirubhai Ambani is also the 6th richest person in the world with a net worth of $US81.1 billion. He is the Managing Director and Chairman of Reliance Industries Limited (RIL), which ranks as one of the Fortune Global 500 companies.

Born in the British Crown colony of Aden (now in present-day Yemen), Mukesh Ambani lived in Yemen for only a short period since his father, the tycoon who founded Reliance Industries, decided to move back to India for focusing on his trading business.

Mukesh Ambani completed his BE degree in Chemical Engineering from the Institute of Chemical Technology and then enrolled for an MBA at Stanford University. However, he withdrew from the university since his father had the belief that real-life skills are better learned from experiences as compared to studying in a classroom.

Dropped out of: Stanford University

Famous for: being the Chairman and MD of Reliance Industries

CEO of Whole Foods Market, John Mackey was born in Houston and studied Philosophy and Religion at the University of Texas at Austin as well as the Trinity University. His father, who was a professor of Accounting and the CEO of LifeMark served as an investor for the Whole Foods Market as well.

For around six years, John Mackey studied different topics to advance his knowledge pool rather than acquire a simple degree and co-founded SaferWay, his first health food store with his girlfriend in 1978. Later on, both of them dropped out of college.

In 2003, he was named Ernst & Young’s Entrepreneur of the Year and Barron magazine’s top 30 CEOs in 2008. In May 2008, Bentley College awarded him with an honorary bachelor’s degree.

Dropped out of: University of Texas at Austin Trinity University

Do We All Just Need a Vision or a Degree to Make it Big in Life?

As is common knowledge, the education that we acquire from our institutes can only prove to be helpful if we have the vision to take it forward. You will see many individuals who are highly qualified but stuck in their vicious cycle of problems.

Education is important in life, for without the right kind of knowledge and awareness, you will not be able to decide your vision in life either. All these college dropouts spent some time at their universities, found their calling, and only dropped out when they knew they had a chance at making their vision work.

If you are a student who is currently enrolled in college and feels dissatisfied or stressed out due to your academics, such as your incoming dissertation, you can get in touch with us for online dissertation help. Not only will we help you with your dissertation, but we will provide you consultancy for your subject as well!

How To Manage Your Student Loan Balance?
5 October 2020