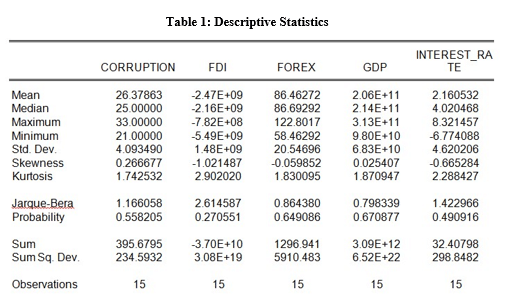 The unit root testing has also been executed in order to determine whether a unit root exists in a time series variable. Moreover, this testing is also done to determine whether the data is stationary or not. The null hypothesis and alternative hypothesis confirm the presence or absence of a unit root in a time series data. The following is the unit-root testing for the variable GDP. Here it becomes important to mention that the probability value determines the presence of the unit root and suggests whether the data is stationary or non-stationary. As the probability has appeared greater than the threshold value of 0.05 therefore, it can be suggested that the unit root exists and confirms the data is non-stationary.

Similarly, the following is the unit root-testing for the variable FOREX. The probability value has appeared as 0.969 which is considerably greater than the threshold value of 0.05. In this sense, it can also be confirmed that unit root also exists in the data set obtained for the variable FOREX. Moreover, this also confirms the collected data is non-stationary.

The below-mentioned table illustrates the unit root testing for the variable interest rate. The probability value has appeared as 0.818.  In this sense, it can be suggested that interest rate the unit root and the data is non-stationary

In the below-mentioned table, unit root testing has been executed for the independent variable of the study FDI. With regards, to the obtained probability value (0.6835), it can be confirmed that the unit-roots also exist in the gathered time-series data. This confirms that the gathered data is non-stationary.

With regard to the variable FOREX, the probability value has appeared as 0.0012. As this value is lesser than the threshold value of 0.05 therefore, it can be suggested that the significant relationship do exists between FOREX and FDI. Meanwhile, it can also be stated that FOREX significantly influences the FDI. Nonetheless, it becomes important to highlight the coefficient value that has appeared in negative. In this sense, it can be articulated that though FOREX establishes a significant relationship with FDI however, it negatively influences the FDI in the context of Pakistan. The relationship can also be supported by one of the secondary findings suggesting an increase in FDI increases the demand for currency (Lee and Wang, 2018)). In this sense, the discussed prior findings also confirm the findings of the current study. The finding confirms that the significant relationship between the variables exist however, the current study has suggested that significant but negative relationship exists between FOREX and FDI.

The probability value for the interest rate has appeared as 0.487. The value is greater than the threshold value of 0.05. In this aspect, it can be confirmed that no significant relationship exists between the variables interest rate and the dependent variable of the study i.e. FDI. Moreover, this can also be confirmed that the interest rate does not influence FDI within the context of Pakistan. This can also be confirmed with one of the literature findings suggested by Hadi, Zafar, Iqbal, Zafar, and Hussain (2018) arguing that the low-interest rate does not contribute to the attraction of FDI. In this notion, the findings of the current study can be confirmed and supported. Lastly, the probability value for corruption has been obtained as 0.0423. As the value has appeared lesser than 0.05 therefore, it can be articulated that a significant relationship exists between corruption and FDI with respect to the case of Pakistan. This contradicts the findings suggested by Canare (2017) who have suggested that corruption tends to decrease the FDI inflows and suggested that countries that were less corrupt were able to receive higher FDI inflows. The reason for this significant can be due to the limited tenure study or the delimiting factors where the researcher was unable to acquire sufficient data to investigate this relationship.

One of the objectives of the study was to analyse the impact of GDP on FDI. The findings of this study suggest that GDP does not influence significantly to FDI. The current findings are in contradiction with the literature findings such as Ali and Malik (2017) who have suggested that positive relationship exists between GDP and FDI. This contradiction is justified in a sense; higher GDP is deemed as the one positive indicator for the market and become the source of attraction for foreign investors.

Moreover, determination of the impact of FOREX on FDI was also the one objective. The study confirms the significant relationship of FOREX with FDI nonetheless; negative influence has also been confirmed. In this sense, it can be suggested that higher FOREX can affect FDI inflows. The findings of Cambazoglu and Günes (2016) have also suggested that those FDI inflows are also subject to foreign exchange rates as the decrease in FOREX indicates the depreciation in the domestic currency which also effects the foreign investment.

Analysing the impact of corruption on FDI was also the one underlying objective for the current study. The study has found a significant impact of corruption on FDI. However, in the prior findings, it has been discussed that that corruption establishes a negative relationship with FDI (Canare, 2017). Meanwhile, it has also been discussed in the prior studies that FDI is fostered among those countries on which foreign investors develop trust and appreciate the transparency and accountability. Nonetheless, the current study confirms the positive relationship between the variables and suggests the corruption positively influences FDI.